Pokies, fruit machines, puggies; video slots go by all kind of different names in the world. Due to this international popularity, the slot is a game that a lot of people tried to cheat over the times.

Is It That Easy?

Yes and no. Slots were first invented in 1887 in the form of an automatic card machine; since then, they’ve completely evolved. Back in the old times when the slots were mechanical instead of electronic, cheating them was relatively easy. Players had a couple of incredible tactics and tools — the most popular being the Monkey’s Paw. Tommy Glenn Carmichael, the famous American cheater, invented a tool that had a hook on one end. And once a player would slide this hook into the coin chute, it would hold the coin release door until all the coins popped out. The worst part was that the Monkey’s Paw wasn’t something only Tommy could make — any regular player could create one. And once casinos noticed their slot machines had been completely emptied out, they learned how this tool worked the hard way.

Just like Tommy, a lot of players had their own witty ideas on how to fool the slots — Shaved coins for example. Players realised that if they shaved the edges off a coin, it would go straight through the machine and fall out, all the while triggering the bet. This meant you could have potentially earned a lot of money without investing a single dime. And here is one of the most famous methods you’ve probably seen in a lot of films — coin on a string. A player would attach a string to a coin, put it into the machine, and then pull it out. The slot would still get triggered and grant the player a spin. Fortunately, this was the easiest method to pull off, and players started to abuse it, so casinos quickly realised what they were doing and found a way to stop this practice.

The Times Have Changed 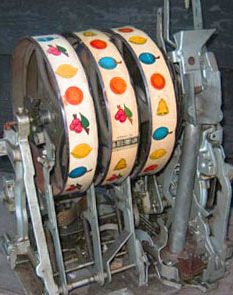 People invented the first video slot in 1976, and this completely changed the industry. Almost nobody could cheat these video slots. But there was still a case where a couple of players managed to do so only a few years ago. An infamous group of Russian players found a way to trick modern video slots in 2014. And believe it or not, it was thanks to Putin. No — the Russian President didn’t help them cheat the American casinos — the man is a millionaire, so why would he? He indirectly triggered a chain reaction that made it easier for this team of smart Russians to trick the slots in the American casinos. Putin entirely banned gambling in Russian in 2009. Consequently, in a state of panic, the casinos started selling video slots to anyone for significantly low prices. They wanted to get rid of all the gambling equipment immediately but still earn some cash.

A couple of friends from St. Petersburg purchased some of these slot machines for a very good reason. They had no intention to use them for the sake of fun, and they wanted to examine them and figure out how they worked thoroughly. After a while, they found a mathematical solution that would help them mess with the software. Additionally, there’s one thing you should know about any land-based casino — the people behind the cameras always keep an eye on big winners. They do it for one reason — to determine if the players are cheating their system. The moment you start winning too much, you will find yourself on the casino’s radar — the ultimate fact is that casinos don’t like consistent winners. You’re the one who should be losing the money, not the operators.

Now you can see why their cameras immediately noticed a couple of players who were winning so easily. These players always held one of their hands in their pockets, while only placing small bets, followed by big ones all of a sudden.

Here’s How They Did It

They developed an application through which they were able to access the slot’s screen on their smartphones (the ones in their pockets, remember?). Each time they would put a cent inside the slot, they would immediately gain access to the screen. The smartphone would transfer all this information to a team in Russia in real time. Next, the players would bet cent after cent until their phones would start vibrating — that’s when they would bet $100 and earn over $1000. Although the team tried to win small to stay off the radar, it didn’t take the operators long to realise what was going on.

The issue was that they couldn’t catch them; on the surface, they weren’t doing anything wrong, and Russians are definitely allowed to play pokies at casinos by all means. But after a while, the casinos and the police had enough proof to investigate the players, and that’s when they found out what was really going on.

Here’s why you can’t pull this off anymore — the only video slot they successfully managed to figure out was the Aristocrat Mark VI. The programmers updated the software since then, and there are only around 100,000 of these pokies left in the world today.

Don’t Let Them Fool You

Let’s set one thing straight — trying to hack into a pokie is illegal. So do not ever attempt to do it — Most of the people who tried ended up in gaol. Virtual casinos offer thousands of online pokies in Australia, and they made sure this software can fight back any threats coming from the outside. The only people who would ever be able to use the software to their advantage are the creators, but they wouldn’t dare. Most importantly, online slots work based on RNG (Random Number Generator). It’s a program that generates different sequences you see on a slot. The developers regularly update it and secure it so no hacker could ever play with it.

If you ever see an ad offering you a device that can help you cheat the slots for only $20, be well aware it is an attempt to steal your money. Nobody can do this.

All in all, this is not a game that can bring you a lot of money. So your main income should definitely not come from casinos or slots. That’s why instead of trying to cheat the slots to win big money, you should start using them for fun. Bet small amounts and try to relax; after all, isn’t this what us Aussies do? We use gambling as a form of leisure, and it certainly isn’t the only easy way to get rich. Have fun, and remember to be responsible.